As I mentioned in my last update on my progress with the Evolve Artist course, I’m just starting the paintings for Block 2. This is exercise 11, although it’s only the first of ten paintings (the previous exercises were drawings).

Like the Block 1 paintings, these are all in greyscale – no colour is allowed until Block 3! Unlike Block 1, we’re now drawing and painting from life, rather than using black and white photographs. We’re still restricted to four values, but since the objects are in colour, this makes assessing the relative values a bit more difficult. I’ll probably make some mistakes in this area until I’ve had more practice. I also made a mistake with the proportions, since the pyramid should be slightly taller. 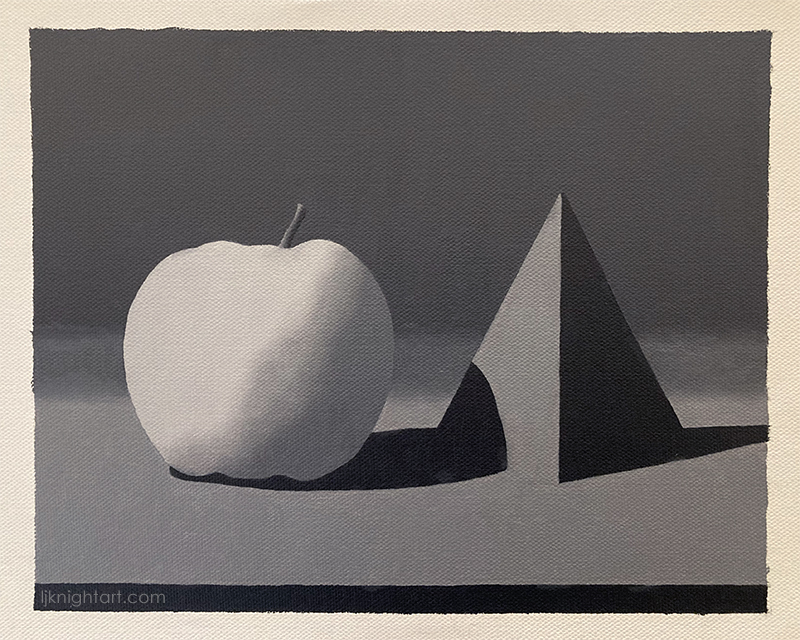 The paintings in this block start off very simple, and get a bit more complex with each exercise. Everyone creates their own still life setup, but at a similar level of complexity. Or at least we’re supposed to; some people add very complex objects, but I’m going to stick with the guidelines. There’s no point making this harder than it needs to be!

For the first two or three paintings we’re not supposed to add reflections and highlights, which is why the apple looks so flat. But even though the subjects for these exercises aren’t that interesting, I’m glad to be working on my own compositions now. It’s more fun to create something from scratch, even if it is very simple, rather than filling in other people’s drawings like we did in Block 1.

One issue I’m having is that my drawings are taking longer than the 30 minutes they suggest we should be spending on these. But my paintings take longer than they seem to expect too, so I guess I’m just slow in general 🙄 I’m going to try not to worry about that any more!

This entry was posted in Art Updates, Blog and tagged Evolve, Food and Drink, Oil, Sketches and Misc., Still Life.

Affiliate Disclosure: This site contains affiliate links. As an Amazon Associate I earn from qualifying purchases. This does not affect the price you pay. Click for more information.